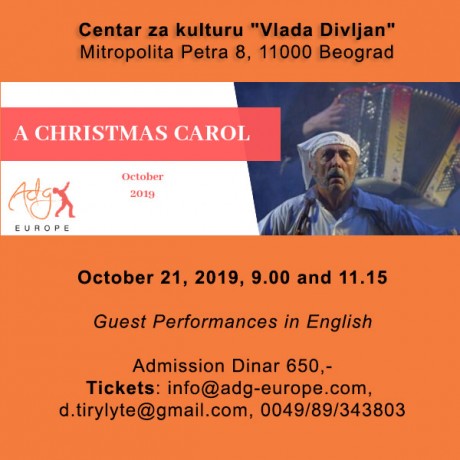 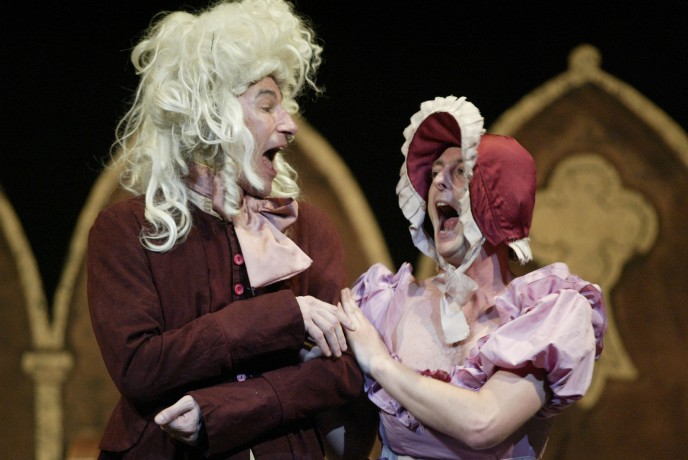 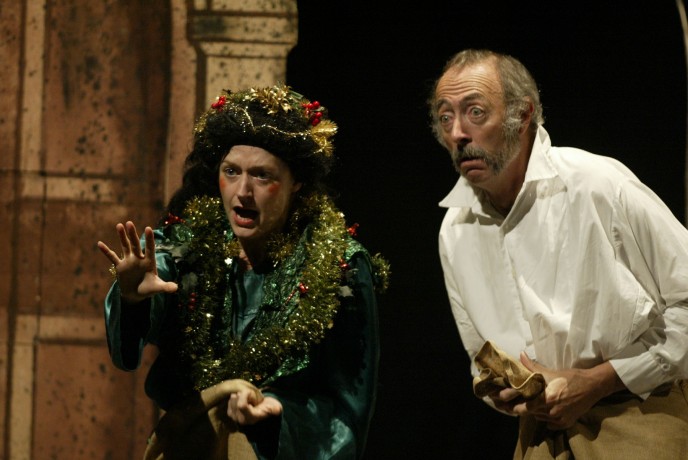 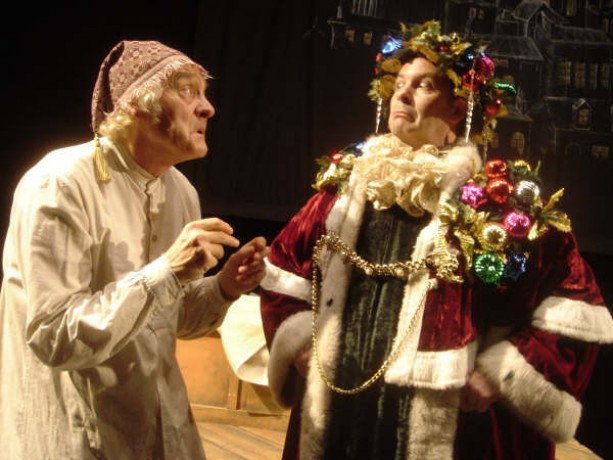 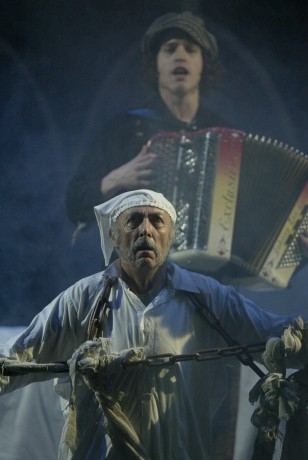 The stage text is available free of charge.

"Marley was dead". Marley was the partner of Scrooge, a mean, bad-tempered merchant who strikes fear and discomfort in the hearts of all he meets; not least his poor clerk, Bob Cratchit, who on Christmas Eve is working late in a freezing cold office for a miserly wage. Reluctantly Scrooge lets him go home to celebrate Christmas with his family, but refuses to accept his Christmas wishes. "Humbug!" he replies. Likewise he turns away carol singers, his nephew Fred, who invites him to dinner, and a gentleman collecting money for the poor. Cynically Scrooge asks him "Is there no Poor Law, are there no Workhouses?" "Many can't go there; and many would rather die." "If they would rather die, they had better do it and decrease the surplus population," replies Scrooge.

In the streets Christmas is in the air: "the fog and darkness thickened so that people ran about  with  flaring  links, proffering  their  Services  to  go  before  horses  in carriages and conduct them on their way. The ancient tower of a church, whose gruff old bell was always peeping slily down at Scrooge out of a Gothic window in the wall, became invisible and struck the hours and quarters in the clouds, with tremulous vibrations afterwards as if its teeth were chattering in its frozen head up there. The cold became intense. In the main street, at the corner of the court, some labourers were repairing the gas-pipes, and had lighted  a  great  fire  in  a  brazier,  round  which  a  party  of  ragged  men  and  boys  were gathered: warming their hands and winking their eyes before the blaze in rapture. The water plug being left in solitude, its overflowings sullenly congealed, and turned to misanthropic ice. The brightness of the shops, where holly sprigs and berries crackled in the lamp heat of the Windows, made pale faces ruddy as they passed."

But Scrooge notices none of this as he walks back to his huge and desolate house. As he opens the door he thinks he sees in the door-knocker the face of his dead partner, Marley. Humbug, he decides - but sees it again in the fire-place. And at midnight he is woken by the fearful sight of Marley's ghost, wrapped in endless iron chains. Marley explains that he has come to give him a last chance to change his ways, and so avoid becoming a tortured soul, as he is forever  doomed to be. Three ghosts will come to visit Scrooge: the Ghost of Christmas Fast, the Ghost of Christmas Present and the Ghost of Christmas Yet to Come. These three ghosts in turn take Scrooge through life: back to his own unhappy childhood when he still had feelings for others; to families and homes celebrating Christmas with love and joy, even the poorest of them like the Cratchits with their crippled son, Tiny Tim; and finally into the future, where he sees a body lying on his bed, hears people discussing his death, is shown his own gravestone and visits a den of thieves where his belongings, even his own clothes, are being sold.

After these shattering revelations Scrooge realises how much happiness he has missed in his life and how much unhappiness he has caused. He repents and decides to change his ways - which he does with gusto! He visits his nephew Fred with Christmas greetings, he gives a large sum of money to the poor, he sends the biggest turkey in the town to the Cratchits, and gives Bob a rise in pay - in short he becomes a true - and happy Christian gentleman. "And it was said of him that he knew how to keep Christmas well, if any man alive possessed the knowledge. May that be truly said of us, and all of us. And so, as Tiny Tim observed, God bless Us Every One!"

“One of the most interesting developments on the current theatrical scene.” –
The Guardian, Britain.

“If young people need to be persuaded to go to the theatre, TNT are the company to see.” – Sudkurier, Germany.

“American Drama Group Europe” in cooperation with “TNT Britain Theatre” will visit Serbia once again in October. In April, the theatre company has already performed “Frankenstein” by M. Shelley. This time they are coming back to Novi Sad, Čačak, Belgrade and Niš with the more thrilling and teachable performance – “A Christmas Carol”.

“American Drama Group Europe” is an internationally renowned fully professional touring theatre company that has been performing musical theatre plays in English, French, and Spanish throughout the world for over 4 decades – from China and Japan to Australia and Singapore, from North America to England and Scandinavia to Germany and Central Europe. They have an impeccable reputation for producing some of the finest plays with a very high-quality entertainment value and they have won first prize at various theatre festivals including Shanghai, Edinburgh, Thessaloniki, Munich, and even Teheran.

“A Christmas Carol” by Charles Dickens – this simple story brings a smile to most people’s face and why not? It might be the best short story ever written, or the best loved, or the best known or the most enjoyable, it certainly has to be performed, as Dickens himself knew. It’s December and we must have our pudding, our parsnips and our Christmas Carol.

If “A Christmas Carol” is the most popular story ever told, then this stage version is possibly the most successful recent adaptation. This production is true music theatre –not just a seasonal entertainment but a real gripping and dramatic tale. A performance for young and old, a Christmas feast of theatre that has delighted audiences in almost every corner of the globe.

The story is enormous fun, but it is also surprisingly serious. We take you down the alleys that Dickens travelled, through a London that defined modern life because it was the first megalopolis, an urban nightmare where the very air was unfit to breath. The wealthiest city in the world was the city with the poorest in the world. This was a contrast that Dickens dedicated much of his life and work to exposing.

Today the truly poor have been banished to the Third World. London only represents a part of the world that has forgotten the tue message of “A Christmas Carol”: the Christmas Spirit is joyful because it shares its joy and its feast with others, especially the poor. The play is for them and for you.

“A wonderful season treat... Behind the clever jokes and very hummable tunes is a timely reminder that Christmas is about more than shopping and making money.  Touring theatre at its best.” – SOUTH CHINA MORNING POST, Hong Kong

“A performance like this is worth far more than many literature lessons put together.” – ERFGOOIERS COLLEGE, Huizen, Holland